Utilizing the Mathnasium Method, our franchisees and tutors take pride in teaching our students with a different approach, one that makes sense to them.

The Truth about Parallel Lines

Parallel lines are lines that are on the same plane and never intersect.  The distance between the two lines remain the same and do not change, no matter the length of each line.

Posted by Anonymous at 7:27 AM No comments:

Math is sometimes seen as a subject students either love or hate, something they simply get or don't get.

Not necessarily so, says Mathnasium, which brought its franchise and its motto, "children don't hate math," to Hooksett earlier this year.

"A lot of students over the years come to feel like math is something that's just torture, and they kind of hide in the back of the classroom. They hope the teacher doesn't call on them," said Martha Gagnon, center director. "They might be embarrassed, frustrated, so by the time they come to us, they just hate math."

Mathnasium aims to help them get over their anxiety.

"Once they see that we can help them make sense of math, they start to overcome their frustration, and they end up wanting to come to Mathnasium," she said. "Maybe no one ever explained it to them that way, and a lot of students end up having all of their grades improving, not just math, because they have a better outlook, more confidence."

Mathnasium, a franchise tutoring center for students in grades 2-12, opened in January. The center's memberships function like those with a gym: once a member, students may come to gymnasium as often as they like, even every day. The programs are tailor-made to student needs.

Students take an oral diagnostic-test, followed by a written test based on the oral's results, which is used to create a customized learning plan for the child.

A third of the time is spent with this customized lesson plan. The other two thirds are given to something called "number sense" and working on homework.

"A lot of the students have a real hard time with their homework, and their parents don't feel comfortable helping them because they didn't learn things necessarily the same way that students are learning them now, and it ends up being a frustration in the family," Gagnon said.

Number sense is the intuitive grasp of numbers and patterns which is as innate in the mind as language. Mathnasium attempts to reintroduce that concept to students, freeing them from the frustrating mire of rote memorization.

The center also works to instill this number sense in students who struggle with it, using exercises to get children off of counting on their hands or get them to think in doubles, for instance.

"Number sense is something that comes naturally to some kids and not to others," she said. "What we do is we try to work with them on things like counting and grouping, proportional thinking so that when they get older, they're not coming up with an answer to a math problem and not even know when their answer is completely off the wall, and the earlier we can start working with them, the better."

Gagnon's background is in computers, and she once served as the youngest programmer at New Hampshire Insurance. After returning home from a three-year stay in Alaska, she began thinking about the next step, which she found after she heard a radio advertisement for Mathnasium.

"I've always loved math, and I was kind of at a crossroads, so I decided to pursue the opportunity," Gagnon said. "I went out and met with Mathnasium in Los Angeles, and I guess you could say the rest is history."

Mathnasium is open Monday through Thursday, 4 p.m. to 8 p.m., and Saturday 10 a.m. to 2 p.m. The cost varies between programs, but according to Gagnon, parents generally end up paying something in the range of $20 to $25 per hour of instruction. The center also has an SAT prep program, which is offered to regular high school members at no extra charge.

The Importance of Telling Time in a Digital Age 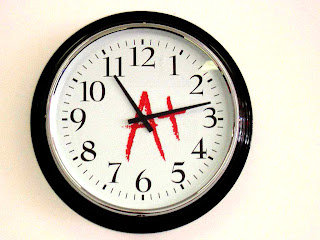 Most students today grow up with tablets, cell phones, and laptops at their fingertips. These tools can aid learning, but they can also encourage laziness. With the Mathnasium Method, students are taught to use their brains, not their iPads. I’ll demonstrate this by using an example of how kids can learn to tell time.

When students are taught these counting skills before they deal with clocks, learning how to tell time is a very straightforward process. Without these skills, it’s quite a chore.

Here’s a way to teach students these skills:

With the help of parents or teachers, telling time can be introduced to a student as early as kindergarten. The sooner students learn to count quickly using the above methods, the sooner they’ll be using terms like “quarter till” and “half past.”

- Larry Martinek
Posted by Mathnasium Franchise at 2:41 PM No comments:

Stanford, Calif. — When it comes to math, MRIs may be better than IQs — and even past math scores — at showing whether a tutor can help a child master everything from trapezoids to trigonometry.

A new study from the Stanford University School of Medicine says that the size and circuitry of certain parts of children’s brains are excellent predictors of how well they’ll respond to intensive math tutoring.

The researchers’ most surprising finding was that children’s IQ and math scores had no effect on tutoring outcomes, yet brain scan images “predicted how much a child would learn,” said Vinod Menon, a Stanford professor of psychiatry and behavioral sciences who was the study’s senior author.

The study was published online Monday in the journal Proceedings of the National Academy of Sciences.

A control group of children also had their brains scanned, but they didn’t get any tutoring.

The kids who were tutored showed across-the-board gains in their arithmetic skills, with the levels of their improvement varying wildly — from 8 percent improvement up to 198 percent. The children in the control group showed no signs of improvement.

The researchers found that the kids who responded the best to tutoring tended to have a larger and more active hippocampus. Named after the Greek word for “seahorse,” the spirally hippocampus is known to play an important role in learning and memory. But its role in mastering specific skills — like math — hadn’t been explored until now.

Even more than its size, the hippocampus’s ability to get along with other parts of the brain was the biggest predictor of math success.

The type of MRI used by Menon’s team is called an fMRI (functional magnetic resonance imaging), which measures changes in the flow of oxygenated blood from one part of the brain to another.

Like watching electricity flow between two points, the machine reveals how much one section of the brain is wired to other parts, “much like you might measure the synchronization of two different clocks,” Menon said. “The more tightly linked they are, the more learning benefits we see in these children.”

Menon believes the tighter the connections between the hippocampus and the prefrontal cortex — a part of the brain that influences decision-making and behavior — the more rapid the retrieval of stored knowledge.

The fact that a brain scan — rather than IQ or math scores — could predict how students would respond to tutoring also surprised Michael Posner, a cognitive neuroscientist at the University of Oregon who was not involved in the study.

But Posner is convinced that the “variety of very modern imaging methods” used by Menon were accurate. “That’s one of the main reasons this study is important,” he said.

Posner was also surprised by the involvement of the hippocampus, rather than other regions of the brain, in learning math. “The hippocampus isn’t a system that one would’ve thought specific to mathematics,” Posner said.

“For me, the intriguing speculation is that the reason these areas are better in these children is not because they were born better, but because they had acquired important learning skills at an earlier age - and not necessarily mathematical skills,” Posner said. “It might say that our early education should be designed to make the child a successful learner, no matter what he or she learns.”

Menon said he hopes that someday brain MRIs - which would cost parents upward of $500 - will help guide educators about the best approaches for teaching math.

But Kobad Bugwadia, owner and director of the Mathnasium tutoring center in Campbell, Calif., isn’t so sure.

He said he thinks the results of the study are useful for understanding how the structure of the brain influences learning, but stops short of envisioning the scans as a way to predict math performance.

“Maybe how quickly children learn could be different,” said Bugwadia, who left his job as a successful Silicon Valley electrical engineer to help children shed their fears about math. “But at some point, I strongly believe that they all have abilities to do well if given the right tools and opportunities.”

Hear from the creator of the Mathnasium Method, Larry Martinek.

Every day, students around the world attend Mathnasium learning centers to boost their math skills. We are highly specialized; we teach only math. Members usually attend two or three times a week for about an hour. Our goal is to significantly increase your child's math skills, understanding of math concepts, and overall school performance, while building confidence and forging a positive attitude toward the subject. For more information, visit: http://www.mathnasium.com